We have acquired some breeding stock to work with for our violet budgie goals.  Some of them will be old enough to breed in July, and some will wait until fall.  When our pairs are decided on, we will post photos and bios for them.  Assuming they get nest boxes in July, that means babies should be ready to go some time in October.  Stay tuned.

We decided to try to create the elusive combination of cinnamon and 'ino, which is known as a lacewing.  A lacewing is a red eyed parakeet with no body color (other than white or yellow), but showing faint brown wing markings.  It is achieved when the cinnamon gene and the ino gene recombine to attach themselves to the same X chromosome.

The first step in this process is to breed an ino with a cinnamon.  But that doesn't produce any lacewing chicks, it produces male chicks who are split to cinnamon and split to ino. (Called double splits.)   There are a few other steps to follow, so this will be a multi-generational goal.

Any type of ino budgies can be used, whether they are lutino, albino, or creamino.  Here is a link to some images of  lacewing budgies.

After I breed some double split males, those will be bred to cinnamon hens.  Then if the crossover occurs, lacewing could be visible in the hen chicks, or the male chicks could be split to it.  Test breeding of those males will show whether or not they are.

A cinnamon hen
In 2013, we completed the first step, which is to produce the double split males.  We kept two boys from our 2013 pairing of Adrian and Aveline.


Adrian and Aveline's two boys, both split to ino and cinnamon:

In 2015, we worked on the second step of this plan.  We produced chicks from both of these boys. We used those chicks in step three of the plan, in 2016, which was to test breed the boys to find out if they are split to the crossed over genes. We continued to test breed the rest of those boys in 2017.  We tested 7 of them, and finally, in February of 2017, we found out that one of them had the crossover!

Aislin's son Neon was paired with an albino hen, and they had three red-eyed chicks.  Only the females will have lacewing markings.  But the red-eyed males will be carrying the recessive gene in hidden form.

We are so excited that after 5 years (when I bought Adrian as a baby to begin this plan in 2012), we have finally achieved success! 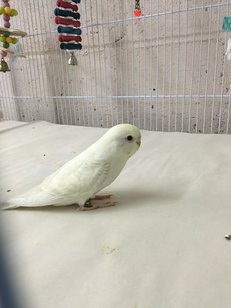 Lacey, our first ever Lacewing budgie! She is a yf2.
Lacey ended up having a younger lacewing sister, too, who we named Lucy.  They are identical.  We now have two sons from Lucy who are carrying the cinnamon-ino combination gene on their X chromosomes.  In 2019, our plan is to breed one of Lucy's sons (Mr. Peabody) to his Aunt Lacey, and the other son (Sherman) to an English lacewing hen that we were able to purchase.  These pairings should produce lacewing offspring in both male and female.

Our 2019 pairing of Sherman and Mrs. White (a white Lacewing hen purchased from English show breeder John Cave) successfully produced two male lacewing boys and 2 lacewing daughters.  Sherman then went on to produce more lacewing daughters in 2020 with a normal green hen, Peridot.  So, after 7 1/2 years of working towards our lacewing goal, we have concluded that part of our budgie breeding plans.


I realize that when I write about the colors and mutations of my budgies I am assuming the reader already has a basic grasp of what I am talking about.  But if you are new to budgie colors, there are some resources on my links page that can help you out.  Also, since this is one of my favorite subjects, I encourage you to contact us with your questions, and I would be more than happy to help you learn budgie genetics.